Twenty five teams entered Captains’ Day on Saturday August 20th and all enjoyed a fun day with lots of things happening out on the course! Mulligans in aid of the Captains’ Charities, Breast Cancer Now and Prostate Cancer UK raised a tremendous £400. Thank you everyone!

The format was 4 ball Medford with a Texas Scramble on the first 9 and an AmAm 2 scores to count Stableford on the back 9. There was a prize for the best Scramble team, the best AmAm team and a prize for the best overall winner which was calculated by subtracting the Am/Am score from the Scramble core. There were also prizes for 2nd, 3rd and 4th placed teams in the Overall comp. There were a few other elements, some predictable, others not so much…

5th   Teams had to open an envelope as they approached the tee. Inside were instructions that there was a circle around the flag on the Green and once you landed inside this circle, you had to use the wrong handed putter, ie lefthanded if you are right-handed and vice versa. These were located in a bucket by the Green. Some teams played tactically and tried to putt outside the area with their own putter. But obviously a longer putt! Some with some success. others not! A big thank you to Steve, the greenkeeper who painstakingly put out the pink ball markers around the hole as he was unable to spray the green.

6th  Horrendous Hole. There were two pin positions, one being on the slope. Teams had to decide which one to go for before getting on the Green. If they went for the Horrendous position, then their Scramble score for the 6th was halved. One team chipped in off the Green and went down for a 2 net 1! Only three teams played safe and were met with consternation back in the Clubhouse! The highest score for those that went for the Horrendous hole was 5 net 2.5….

Halfway House Players were met with free drinks and snacks as they went from the 9th to the 10th and a cheery ‘How you doing’ from Jeff Forrester. There was a chance to discuss the horrendous hole and the merits of playing with a wrong-handed putter halfway around although we don’t think Gary will be taking many orders for new putters! 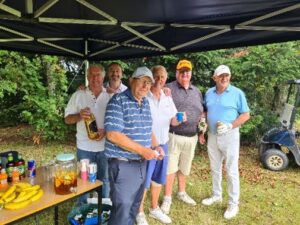 11th         Play Your Cards Right! All players had to pick a playing card and this would determine which club to drive with. Anyone who picked the joker had to use their putter! Jokers were Rich Alsop, Keith Forbes, Lewys Wright and Anthony Pallante. Ten players picked the Ace which meant they could use their club of choice. The white tees were located behind the red tees and to make it more interesting…there was a nearest the pin! Thanks to John Wakelam for overseeing this in a bow tie and gold bowler hat! 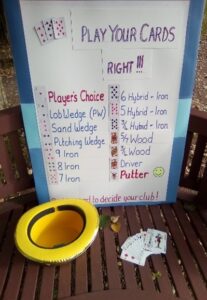 The winners of the Scramble were M Pejovic, N Lake, A Lane and T Murra

The winners of the AmAM and the Overall Winners were R Armstrong, S Harris, D James and Ian Sayce

The results of the three competitions are attached.

Uncollected prizes can be collected from the Reception.

The individual winners were:

Congratulations to all prize winners. A big thank you to John and Jeff for their help on the day and also a big thank you to Mark Laing and his team, on the course and off the course for making it such a fun day…and thank you everyone for joining us on our Captains’ Day.. It was a great day…thank you!